A BRIEF HISTORY OF THE REPUBLIC OF EL SALVADOR

A BRIEF HISTORY OF THE REPUBLIC OF EL SALVADOR

El Salvador, officially the Republic of El Salvador, is the smallest and the most densely populated country in Central America.

El Salvador’s capital and largest city is San Salvador. As of 2016, the country had a population of approximately 6.34 million, consisting largely of Mestizos of European and Indigenous American descent. Despite having little level land, it traditionally was an agricultural country, heavily dependent upon coffee exports. By the end of the 20th century, however, the service sector had come to dominate the economy. The capital is San Salvador 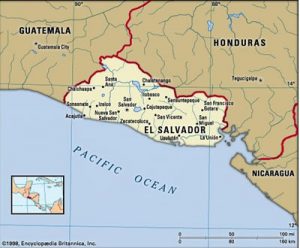 From the late 1970s to the early 1990s, El Salvador was the focus of international attention, owing to its civil war
and to external involvement in its internal conflicts. The war, which pitted a militarily and politically capable left-wing
insurgency against the U.S.-backed Salvadoran Armed Forces, was caused by decades of repressive, military-dominated rule and profound social inequality.

Following the United Nations-mediated 1992 peace accords, which contained fundamental provisions for El Salvador’s democratization (including the removal of the military from political affairs),the country began to recover from years of political and economic turmoil, only to be devastated by Hurricane Mitch in 1998 and by a major earthquake in 2001.Skyrocketing crime, faltering economic growth, and persistent social inequality have further hampered full postwar reconstruction.

The Pipil (descendants of the Aztecs), the predominant tribe in the region prior to the Spanish conquest, named their
territory and capital Cuscatlán, meaning “Land of the Jewel”; the name is still sometimes applied to El Salvador today.
The mixing of the Pipil and other tribes with European settlers is reflected in the modern-day ethnic composition of the
country. El Salvadorans are known for their industriousness, and the country has produced several internationally
acclaimed artists, including poet Roque Dalton.

El Salvador is bounded by Honduras to the north and east, by the Pacific Ocean to the south, and by Guatemala to the northwest. Its territory is situated wholly on the western side of the isthmus, and it is therefore the only Central American country that lacks a Caribbean coast. The entire territory of El Salvador is located on the Central American volcanic axis, which determines the major geographic regions of the country.

These volcanoes are separated by a series of basins (commonly referred to as El Salvador’s central plain), lying at elevations of between 3,500 and 5,000 feet (1,000 and 1,500 metres), whose fertile soils, derived from volcanic ash, lava, and alluvium, have for centuries supported the cultivation of crops. To the south, where the central highlands give way to the Pacific coast, is a narrow coastal plain with average elevations of between 100 and 500 feet (30 and 150 metres). 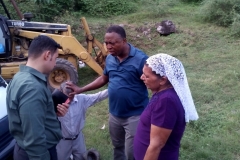 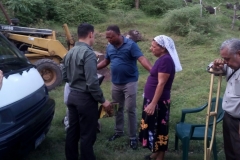 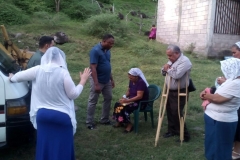 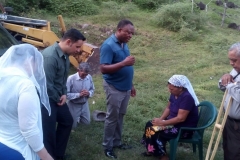 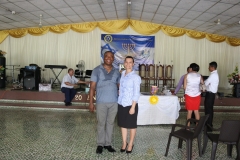 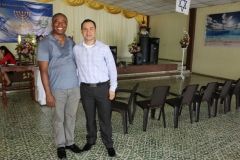 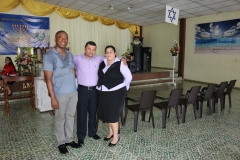 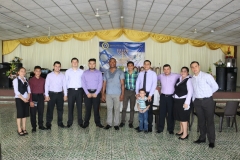 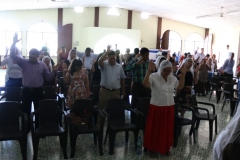 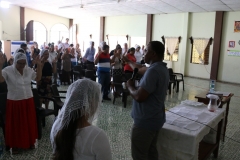 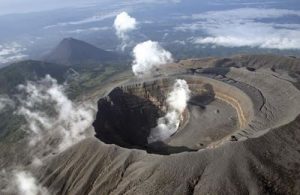 Two principal river systems and their associated tributaries drain the major part of the country. Most important is the Lempa, which enters El Salvador from Guatemala in the northwestern corner of the country and flows eastward for 80 miles (130 km) across the interior plain to form part of the border with Honduras before turning sharply south to run 65 miles (105 km) through the central highlands and across the coastal plain to its mouth on the Pacific.

The Lempa was navigable for several miles inland prior to the construction of two major hydroelectric installations on its middle reaches in the mid-1950s. The eastern part of the country is drained by the Rio Grande de San Miguel system. A series of short north-south streams drain directly from the central highlands to the Pacific. Flooded volcanic craters constitute the country’s largest bodies of water: Lakes Coatepeque (15 square miles [39 square km]), Ilopango (40 square miles [100 square km]), and Olomega (20 square miles [52 square km]). 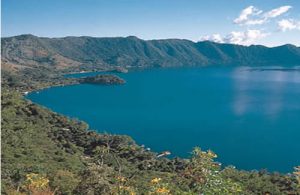 Less than one-fifth of El Salvador’s soils are suitable for agriculture. The central plain and interior valleys have mostly volcanic soils that are relatively fertile but that are also vulnerable to erosion. The southern coast has level, fertile alluvial soils, deposited by the numerous small rivers draining from the central highlands. Combined with high year-round temperatures and abundant rainfall, they provide favourable conditions for plant growth and agriculture.
Climate

The climate of El Salvador is tropical but is moderated by elevation in the interior; in general it is warm rather than hot, varying between the high 50s and low 70s F (about 15 and 23 °C). Heavy rains, known as the temporales, fall in the winter season, from May to October.

The dry summer season lasts from November to April. There is considerable climatic variation in the different regions. The Pacific lowlands and low areas in the middle Lempa River valley have mean monthly temperatures between the high 70s and mid-80s F (about 25 and 29 °C). In San Salvador, the capital, which is 2,238 feet (682 metres) above sea level, the maximum monthly mean temperature is in the mid-90s F (about 34 °C), in March, and the lowest monthly mean is in the low 60s F (about 17 °C), in January.

The higher mountain regions have temperate grasslands and the remnants of deciduous oak and pine forests. On the central plain and in the valleys, small deciduous trees, bushes, and subtropical grasslands are found. The coastal plain and the lower slopes of the southern mountains are covered with either savanna (parklike grassland) or deciduous forests. Among the many species of trees is the balsa, known for its beauty and soft perfume. Also particularly beautiful is the maquilishuat, the pink-tufted national tree of El Salvador. The izote is the national flower.

Because of the amount of land under cultivation, El Salvador is considerably less rich in animal life than most Central American countries. Rodents, reptiles, and insects of many kinds, however, are common. There is a wide variety of birdlife, which includes wild duck, the white and the royal heron, the urraca (which has a blue breast and a gray head and is known for its call, resembling a scoffing laugh), the blue jay, and many more, some of which have fine plumage. A wide variety of fish, as well as turtles and alligators, inhabit the streams, lakes, and rivers.

The intermarriage of Spanish settlers with the indigenous population of the region has resulted in a largely ethnically homogeneous people. Almost nine-tenths of the population is mestizo (people of mixed Indian and European ancestry); the remainder consists of Indians (including the Izalco and, from the village of Panchimalco, the Pancho), people of European ancestry, and other small groups. 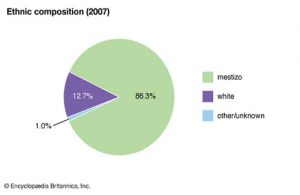 Spanish is the official language of El Salvador. During the precolonial epoch various Indian dialects were spoken, the most important of these being Nahuatl, spoken in the central region of the country, and Poton, spoken in the east. After the initial conquest, Spanish became the official language, and the Indian dialects slowly fell into disuse. A government effort was made to preserve Nahuatl, but it proved unsuccessful.

About four-fifths of Salvadorans profess the Roman Catholic religion. Since the 1990s Evangelical Protestantism has made inroads, particularly among the poor. About one-tenth of the population are Pentecostals. There are also smaller groups who practice other faiths.

More than three-fourths of the Salvadoran population lives in the intermontane basins of the central highlands. For millennia before the Spanish conquest, these areas supported large communities of Indians dependent on the cultivation of crops, such as corn (maize), beans, and squash. The ruins at Chalchuapa, Sihuatán, and Cara Sucia are the legacy of their communities.

The major Spanish colonial settlements, which became the country’s principal cities, were also situated in these central basins and include Santa Ana, Ahuachapán, San Salvador, San Vicente, and San Miguel. This concentration of population was perpetuated during the colonial period by the commercial production of indigo and sugar on private estates, owned by a few wealthy families, alongside the continuing subsistence farming of peasants.

From the 19th century these basins and their surrounding slopes provided an ideal environment for the cultivation of coffee, which became the basis of the national economy.

In the 20th century, urban growth and industrialization increased the concentration in the highland centre of the country. San Salvador grew rapidly in the 20th century and absorbed many surrounding settlements; its major conurbation now stretches continuously from Nueva San Salvador in the west to Lake Ilopango in the east and contains about one-fourth of the total population.

In the east, San Miguel, located on the slope of the volcano San Miguel, is a thriving city where Spanish colonial and modern architecture merge. The city of Santa Ana is the commercial centre of western El Salvador. At the start of the 21st century about two-thirds of the national population lived in urban areas. This distribution of population has been exacerbated by the effects of natural disasters; most of these cities have been subject to one or more destructive earthquakes.

Moreover, the overpopulation in the central highlands has resulted in out-migration to the coastal plain, which since 1945 has been transformed by extensive cotton farming and cattle breeding. Another region that suffers from overpopulation, the northern highlands has experienced severe deforestation and soil degradation as well. The majority of the people who live there are subsistence farmers. 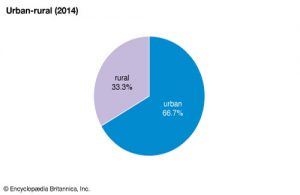 Severe economic conditions complicated by the civil war that began in 1981 caused dramatic changes in El Salvador’s demographics. It is estimated that about one-fifth of the population left the country, departing in about equal numbers for neighbouring countries and the United States. Most of the emigrants have not returned to their homeland (though there has been an increase in the number of deportations of undocumented Salvadorans from the United States since the early 2000s).

Among the remaining population there was massive displacement characterized by a general movement of people from the conflict zones in the north and east to the central cities. The emigration of many young Salvadorans has brought an accompanying decline in the rate of natural increase. At the beginning of the 21st century, El Salvador had a low rate of natural increase. Nevertheless, overcrowding remains a severe problem. 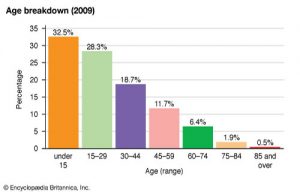 Continue next page : A BRIEF HISTORY OF THE REPUBLIC OF EL SALVADOR